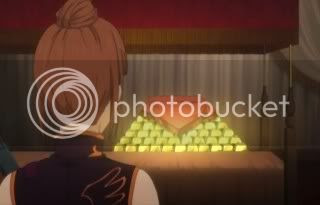 ~ I am loving this more and more. Proof? I posted before going off to work~

The first half of the episode dealt with battled between the Beatrices. The new witch is named Virgilia and she is Beato's sensei. It was really one hell of a fight. I though Beato would lost but through the towers that she summoned, the fight was over even before it started. Now, Virgilia exist outside the chessboard and plays the role of Battler's adviser. She offered her help to Battler who was again down and discouraged to continue the game. She taught him the principle of multi-layered world contraction skill (多祖収縮説), a tool against endless witches. 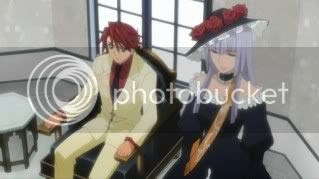 This refers to a contradicting skill used by Battler. He denies anything that does not show proofs of its existence. For example, the battle that happened between Beato and Virgilia didn't happen since he cannot see any traces of any battle that happened. That means, he can deny the fact that something happened in the battle.

Though the truths are already revealed before, this round gave us a more concrete revelation with how the killings happened. The locked rooms formed a larger locked room mystery where one of the six victims is the murderer, created five of the locked rooms, and then died in an accident in the sixth room.

Beato didn't really continue revealing the truth about that accidental death since she was stopped by Ronove. With this, Beato concedes.

The epitaph was solved and it was Eva who solved it! Of course she was pushed by the young Eva inside her and helped her think between the lines. Her guess was right and when she descended underground, she found a door with the 10th twilight written with blood. She opened the door and she saw the gold shining brightly right in front of her.
Served by xtine06 Time: 9:11 AM