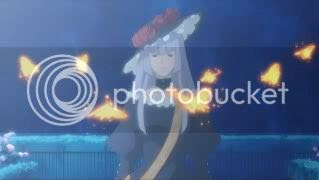 ~ What a very interesting way to end this episode~

Revealed truths in this episode:
Based on the four new revelations, it was confirmed that a human Beatrice once existed on earth. She is a very sweet lady and was only locked up by Kinzou inside the mansion. She is so meek and was afraid of the wolves inside the forest that's why she doesn't go out. The very same reason why she is so shocked to see a young Rosa who was able to reach her alive and well. The two of them became friends and Rosa invited the innocent Beatrice to go out and see the world. Beatrice became excited and agreed that she will go out for the first time.

When the humble Beato went out and admired the ocean for the first time. They are on the cliff walking....then suddenly Beato slipped and she fell to the ground...dead. Now, the 19th person on the island is dead.

It seems that Beatrice, the endless witch was only trapped inside a human body. But when the physical body became dead, her soul was released and the Beato that we all know.

It is also in this episode that the sacrifices for the first twilight were made. The sarifices were: Kinzou, Shannon, Genji and Kanon and Gouda. But Kanon was kinda reluctant to accept this fate and so the mean Beatrice summoned her furnitures. Kanon and the Seven Stakes of Hell fought and if Kanon wins, Beatrice promises that she will let Kanon decide the five people who can escape being among the thirteen sacrifices. Kanon easily won from Lucifer but he still needs to face the other six. This time, Shannon came to rescue and protected him but still to no avail.

Kumasawa seems to be the next target but she blocks them easily and she has a barrier. Interestingly, Kumasawa is actually the previous Lady Beatrice and the current and the past Beatos met once again.
Served by xtine06 Time: 8:40 PM