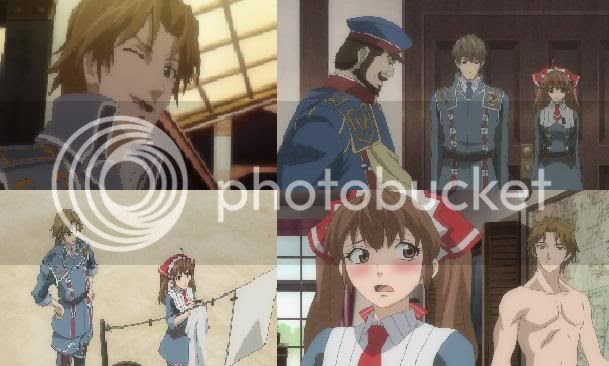 You won't let us participate? Then we will clean!
Welkin really is one weird guy. In this episode, Squad 7 is assigned to assist General Damon in capturing the supply station of their enemies. But since General Damon is greedy and would just concern about his own goodness, he didn't allow Squad 7 to participate. Welkin didn't argue about it while Alicia was really against it. Instead of trying to argue with General Damon, Welkin ordered his squad to do the cleaning of the living quarters of the soldiers. It sounded weird at first but it became a blessing in disguise as General Damon's squad was defeated and he was the only one who survived.
I really sense something between Alicia and Welkin. They are getting along well and sooner or later, they might end up confessing their love to one other. Well, good for Alicia since Welkin is one handsome and reliable guy. He might seem to be weird and happy-go-lucky type but deep inside he is one great guy. I wanna learn more about Welkin's personality as the series go on. On the other note, is it just me or does Faldio really looks like Lockon Stratos from Gundam 00? In any case, I am beginning to love Faldio tooo.
Next episode shows some action and military fight. That'd better be good and something to look forward to!
Served by xtine06 Time: 11:36 PM