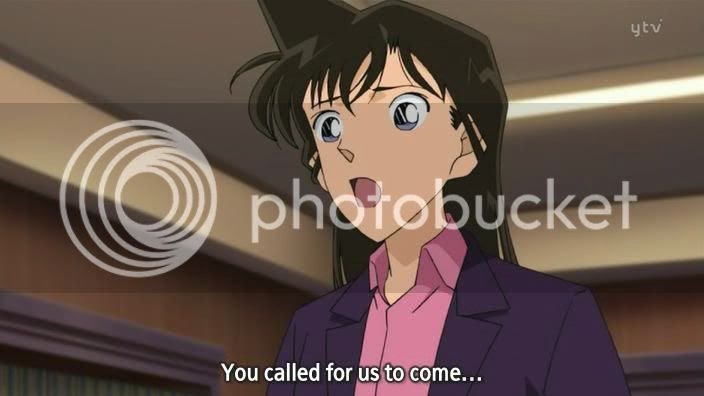 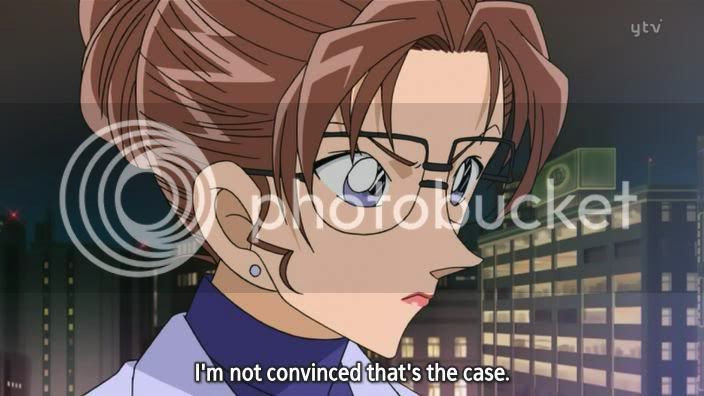 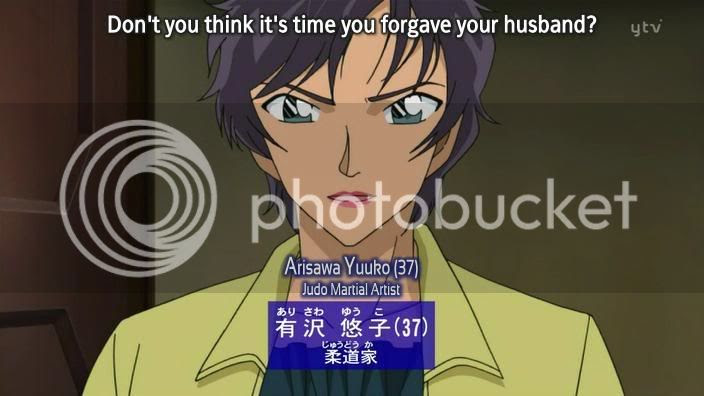 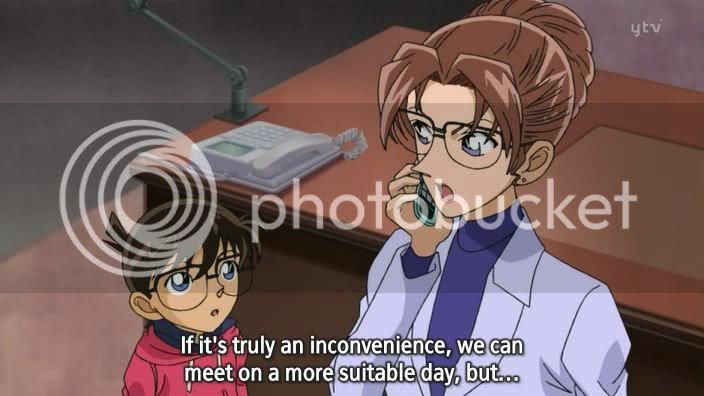 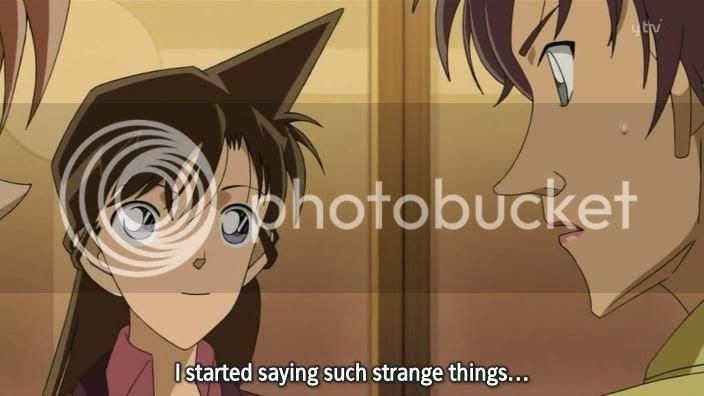 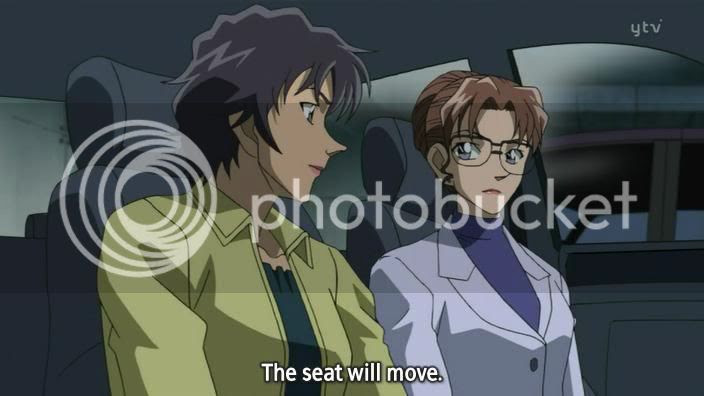 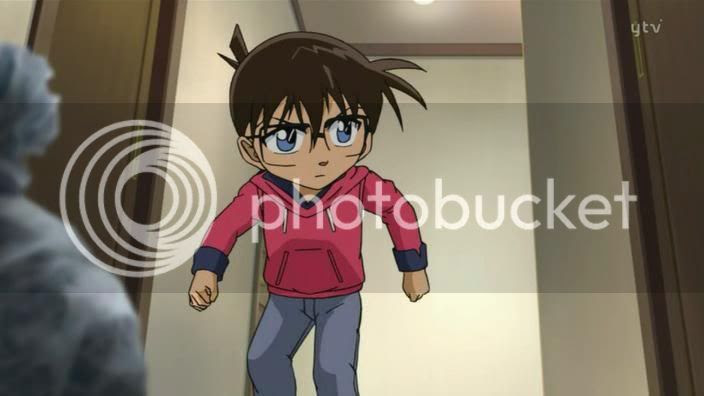 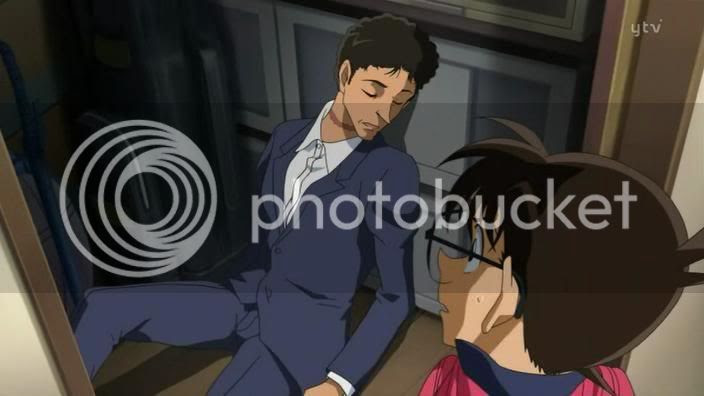 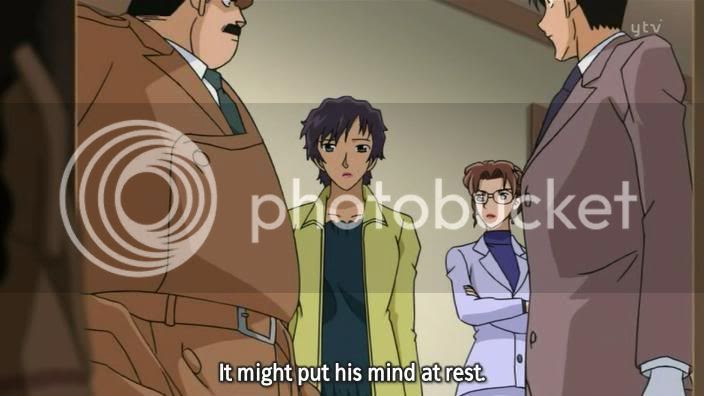 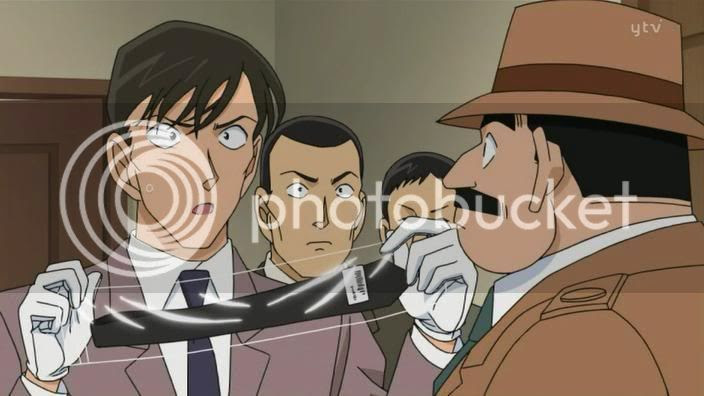 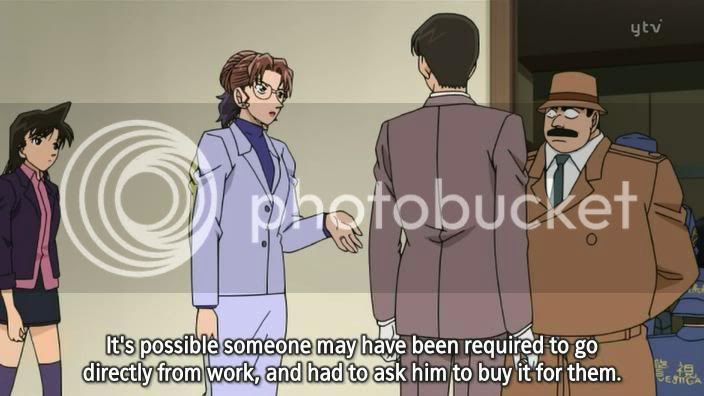 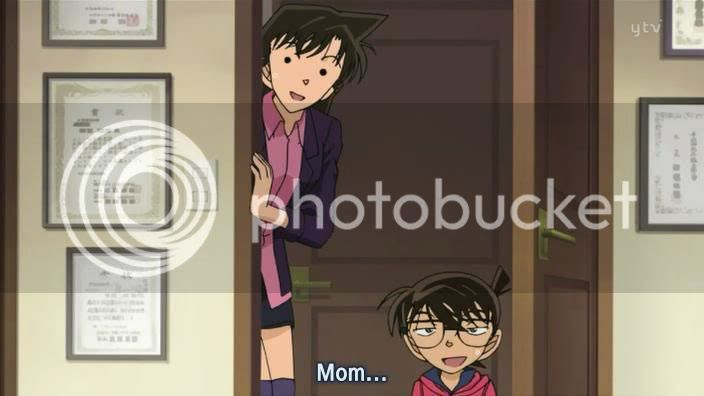 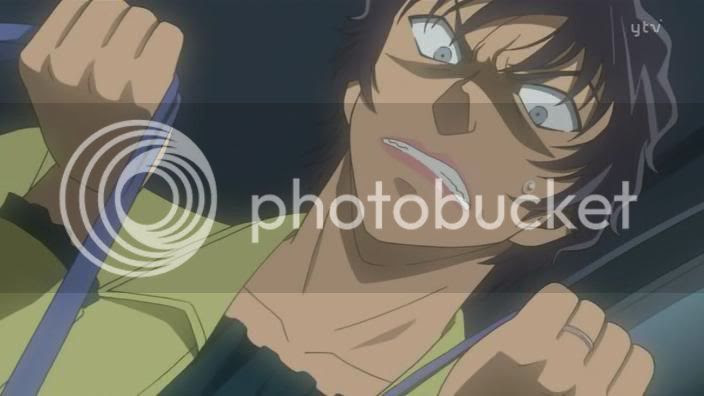 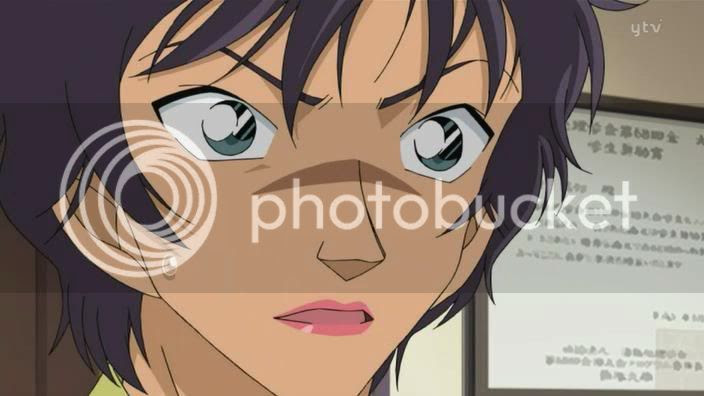 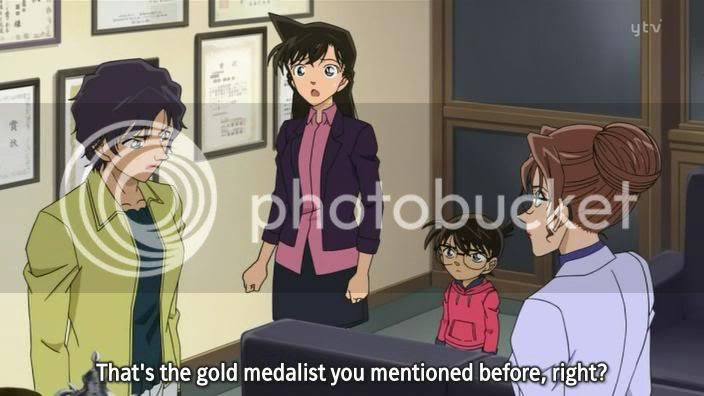 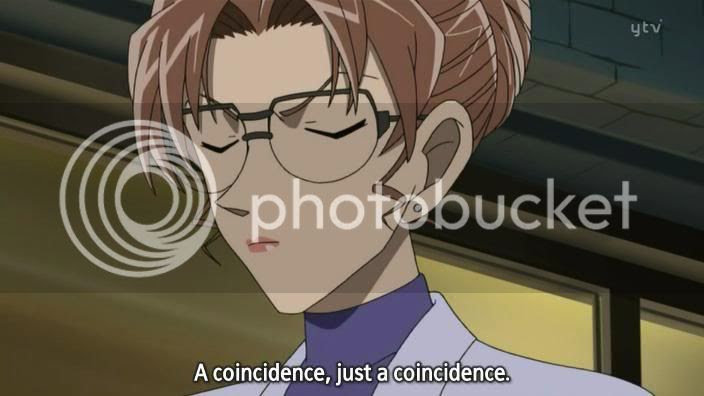 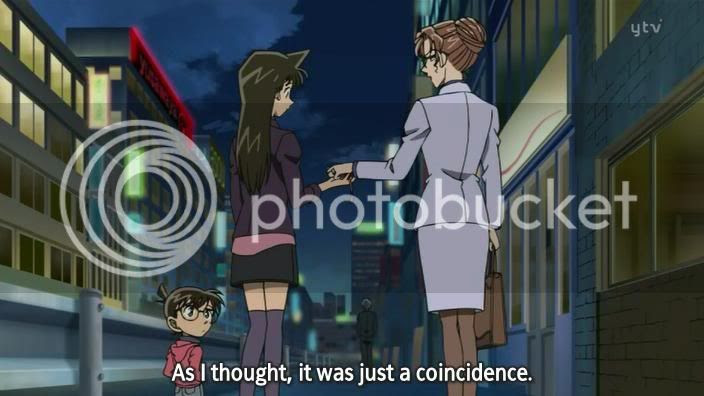 Mind Over Mystery.
I am sorry for posting random Detective Conan episodes. Subs of Detective Conan come out in a different order too and so will be my posts. And so for this time, this will be for episode 528-529, a case entitled Mind over Mystery.

The case starts with Ran together with Conan is meeting her mother, Kisaki Eri. She invited them to dinner because Kisaki wants to introduce Ran to her client. Mouri on the other hand is not with them because of his drinking session. Anyway, Kisaki's client is the judo fighter, Arisawa Yuuko. His husband, also a previous client of Kisaki because of a traffic incident seems to be troubled by a stalker. Ran then suggested that it might be related to the previous traffic incident but Kisaki said that she didn't think so. The traffic incident was settled privately and the stalker problem right now might just be a part of his imagination. Conan then asked as to why Kisaki is the one handling the case when in fact, the job suits more of a detective. Kisaki explained that it's because the husband seemed very appreciative during the settlement proceedings of the traffic incident so if Kisaki will talk to the husband, he might listen.

Arisawa Yuuko arrived at the office, teasing Kisaki about his relationship with Mouri. As they are about to head to Arisawa's house to discuss the case, Arisawa called her husband to inform him that they're going. But according to the husband, he is on the a wake of someone he knew. Kisaki talked to him to reschedule the meeting and it was decided that they will meet at 9:25 pm, when he got home. It seems that the husband has a high sense for time and for him every minute counts. The whole conversation between Arisawa and her husband was heard by everybody since Arisawa accidentally pressed the speaker button. To kill time, Arisawa suggested that they will first dine at a nearby hotel restaurant where the parking fee is cheap.

So as they are eating, Ran and Arisawa get to talk and Arisawa shared about the senpai that he admired. He is Kajimoto Hajime, the coach for the All-Japan team. During his limelight, he is an unrivaled gold medalist in the 81kg class. After seeing him on TV, Arisawa got inspired to study judo too. Then out of the blue, Arisawa mentioned about admiration is only admiration, just like viewing flowers from afar. When you get to close, you will become like Icarus who lost his wings after getting too close in the sun. So it's about time to go but before that, Arisawa said the she will just go to the toilet. In the parking lot, Arisawa revealed the she is a frequent customer of the restaurant because she goes there once a week - alone. Her husband has zero tolerance for new food and so will not enjoy dining there. So as they walking, Arisawa forgot where she parked and Kisaki spotted a white car on the side. She said that she knew the car because she has seen it before. So when they boarded the car, Arisawa demonstrated on how to adjust the seats in case Kisaki is not comfortable. She also adjusted the rear-view mirror and off they go. But as they go out, Arisawa can't find the parking ticket and so she was forced to pay the daily maximum fee of 3000 yen.

Originally, Conan and Ran will be dropped off at the detective agency but Conan, sensing that something is not right suggested that they should come too. He said that since Arisawa is a multi-awarded judo expert, there will be lots of trophies and plaquest that even Ran would want to see. So when they entered the house, the husband's shoes are already there, so Ran and the others went to the living room to wait for the husband as Arisawa went to get him. They saw all the awards Arisawa got and saw a picture of Arisawa with her admired senpai, her current husband and the senpai's son. Arisawa then returned and said that he can't find the husband. She called his cellphone then and they are can hear the phone ringing. Conan rushed to the source of the sound and found the husband's dead body in the closet.

As always, the police arrived. The victim is Arisawa Shirou, 37 years old and a businessman at Haidou Shouji. The estimated time of death is 9:00PM. On his neck is a thin line that suggests that he was strangled to death. Conan suggested that its a necktie since the mark suggests that a thin cloth was used. Everything made sense because if he's going on a wake, then definitely, he would wear a necktie. Arisawa said about the stalking incident and thinks that it's the stalker who killed him. The police's initial theory also leads to the stalker, killing the husband while at home waiting for Arisawa to return home. Conan also suggested that the stalker might be after for money because the wedding rin in the husband's finger is lost. But then, that might not be the case since the fancy looking watch is still on the husband's hand.

When the police are doing their questioning as a SOP, Kisaki and Conan was not fooled by Arisawa's lies. They both have an incling that it was Arisawa who killed her husband. They just have to know how and why.

And so both of them are right. It was Arisawa who strangled her husband to death. The clues are:
So how did the crime happen?

Arisawa predicted the tricks that his husband would use and took note of the time that he will now go home. She then caught her husband in the parking lot, dragged him to the car and strangled him until he is dead. Next, she then placed him on the trunk of the car and came back as if nothing happened and drove the car home with the body lying cold in the trunk. Ran and everybody else were asked to go to the living room to wait so that she can have time transferring the body from the trunk to the nearby closet. And lastly, she called the husband's cellphone so that they can find the body in the closet. The reason why she adjusted the seat and the rear-view mirron upon entering the car is because the car they used was the car the husband drove to the hotel. The husband, knowing that he will be cheating rented a car to use. The husband who is shorter than Arisawa would have different adjustments in the car. The missing parking ticket was also a fake since it's not lost at all. What she really meant was that she wasn't sure as to where her husband hid the ticket. The lost ticket would be a proof that the husband is also at the hotel that night and if a thorough investigation will be made at the car, then they can find traces that a body was there.

The woman the husband is dating is the wife of Kajimoto, the admired senpai of Arisawa. She couldn't stand ruining the family life of her senpai especially that they have an adorable son. But Kisaki said that it's possible that the husband just wants more attention from Arisawa. He is jealous of the the senpai that even until now that they are married, Arisawa fondly thinks of. He dated somebody to ask for his wife's 100% attention and love towards him.

What a sad case though. If only things worked out in another way, things would not have turned out like this.

As for me, I think Arisawa's admiration for her senpai is much stronger than her love for her husband. She chose to take the life of her husband just to protect the family life of her senpai. It's as if saying that he would want to marry his senpai instead but too bad that it didn't turn that way.

Well, the case is now closed and my next Detective Conan posts would be about episode 532 onwards. Subs are now up, it's just I haven't watched it yet.
Served by xtine06 Time: 8:24 AM