Gyakuten Kenji to grace the Court Rooms on May 28th 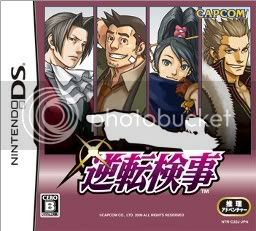 Characters from left to right: Miles Edgeworth (Mitsurugi Reiji), Dick Gumshoe (Itonokogiri Keisuke), Kay Faraday (Ichijou Mikumo), Rou Shiryuu
Gyakuten Kenji -- the long-awaited spin off of the Gyakuten Saiban series is finally going to be released this coming May 28th. I hate to admit it, but I just found out about the release date today. OTL.

NDSi GK edition and the GK Limited Edition Package
But I personally prefer the finger stylus TAT;
Along with the release of the game would be the release of the limited Edition Gyakuten Kenji NDSi as well as the limited edition package that includes: a pamphlet from the spring concert, character illustrations, a DS card case, an orchestra "mini album" (4 of the tracks plus a bonus) and a DVD of promotional trailers.
Players of the game will be controlling Miles Edgeworth this time around. He will be investigating crime scenes throughout the game. I was expecting that there would be court sessions as well for this game, but sadly, there will be a deficiency in desk-slamming and finger-pointing. However, the game does promise new gameplay elements, so this will be something new to those who are tired of the usual courtroom sessions.
Another possible let down is that it's possible that Phoenix Wright (Naruhodou Ryuuichi), the main protagonist for the first three games of the Gyakuten Saiban series would be nothing more than a cameo. The supposed timeline was within the seven year gap that happened in between GS3 (Phoenix Wright: Trials and Tribulations) and GS4 (Apollo Justice: Ace Attorney).
With the E3 convention coming up on June 1, Capcom has stated that "Unfortunately, new Ace Attorney game won't be English enough for E3. We'll be blowing it out at Comic-con with the producer, though" -- so expected preview of the English version with be around the end of July. I'm pretty certain fangirls won't object to seeing Miles and his lovely suit and cravat gracing the DS screens once again X3
Despite some of the disappointments, I am still eager to get the English version, entitled as: Ace Attorney Investigations: Miles Edgeworth that is rumored to be released outside Japan by Winter 2009.
General game information:
Original Name: