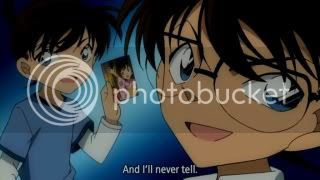 Magic File 3:
Shinichi and Ran
Memories of Mahjong and Tanabata

Another Shinichi x Ran memory that we all can all enjoy ^^

Magic Files, for those who do not know are episodes that serves as a guide or as a reference to any upcoming Detective Conan movie or special. They also portray a memory in Ran and Shinichi's life that will become a big part in a case sooner or later.

Anyway, this magic file is about mahjong. I really do not get much about the concepts of mahjong but all I can say is that, Mouri sucks at playing mahjong and because of a mahjong tile, Shinichi/Conan and Ran remebered a past that made them closer together.

Well, Ran is always being bullied by Daisuke because of her family status. Daisuke calls her family a dysfunctional family and Mouri was just drinking and playing mahjong. Ran, being already matured accepted the fact and decided to simply do not mind the teasing. Of course, Sonoko tried to protect her friend but Shinichi only kept quiet and continued walking. The next day, Daisuke suddenly apologizes to Ran and told her that her mom is a beauty. Why did that suddenly happen?

IT WAS ALL BECAUSE OF SHINICHI!!!! Shinichi, upon knowing that Daisuke likes Ran decides to use him to be a part of his plan. In their school, children always hang wish cards on a bamboo everytime July starts and Ran's wish is for her mother to come home. Shinichi, with the help of Daisuke secretly brought the bamboo to Kisaki's place to make her see her daughter's wish. Because of this, she went home and Ran's wish was granted. Shinichi kept this a secret from Ran for a long time. In fact, it was Kisaki who took the liberty and explained it to Ran later on.

But if you are wondering what is the exchange of Daisuke's help? It's a picture of Ran that Shinichi cut from their picture together in a Tanabata festival. And that would be forever be kept a secret by Shinichi.

In reference to the upcoming movie, the concept of mahjong tiles as something that conveys a message will be used to refer to the case that will be featured later on.
Served by xtine06 Time: 12:22 AM