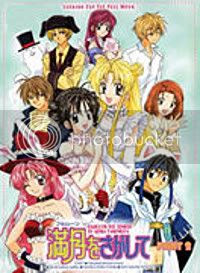 Twelve-year-old Kouyama Mitsuki was devastated when she was diagnosed with a malignant tumor of the throat. She had made a promise to the boy she loves that she would one day become a singer, but her illness made singing impossible. To make matters even worse, two angels of death, Takuto and Meroko, appeared to Mitsuki and informed her that she only had one year left to live. This news provides an even greater motivation for Mitsuki to fulfill her dreams, and with a little bit of divine intervention, she begins her quest to become a professional singer so she can be reunited with Eichi before time runs out. (animenewsnetwork.com)

********
I actually downloaded this one because of my love of music. It was recommended to me by an online friend and so I checked it out. The series is so so so so long with 52 episodes. But the download is worth the wait since it's a very great series. What I really love are the songs being used. They are nice and touching songs and would definitely be in my ipod. The story is also nice that there are some episodes that I can't help but cry. Takuto and Mitsuki has good voices that are so refreshing to listen. I so love them!
Served by xtine06 Time: 11:21 AM