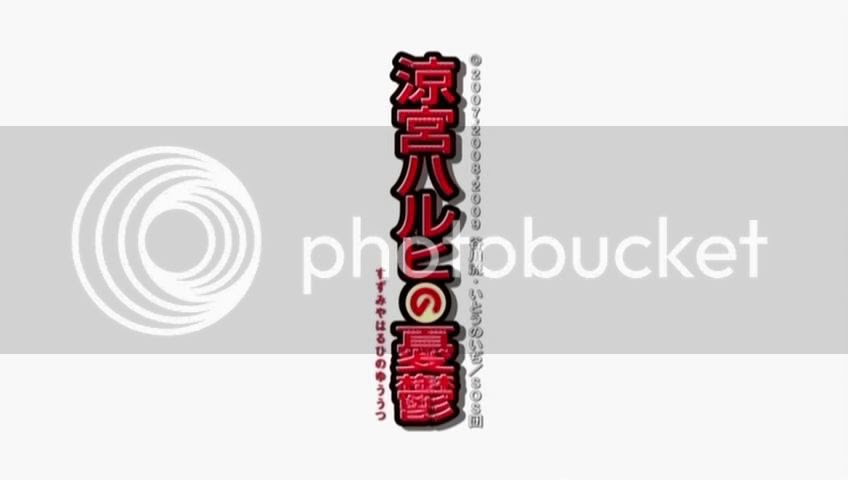 I've recently found out that the second season of Suzumiya Haruhi no Yuutsu a.k.a. The Melancholy of Haruhi Suzumiya was out -- and because I love the insanity of the series I decided to check it out. If you want spoilers, you can proceed to read the summary and impressions that I had in this episode... they are pretty much rich in spoilers.
----
Summary: 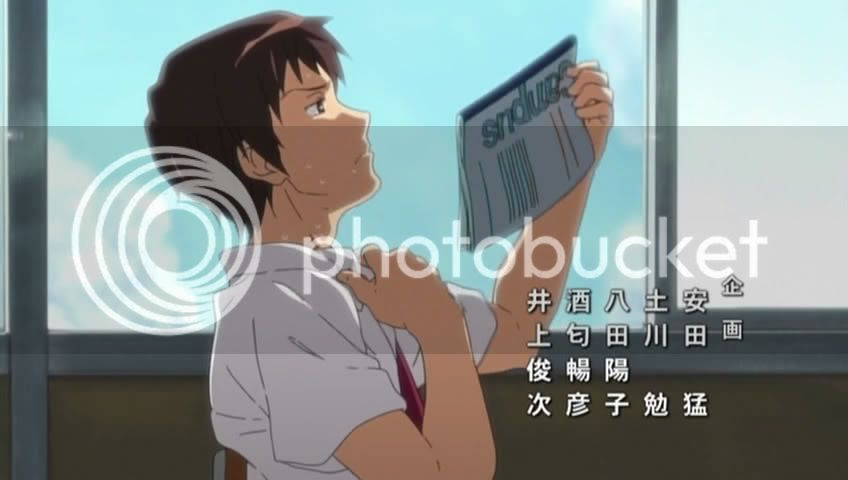 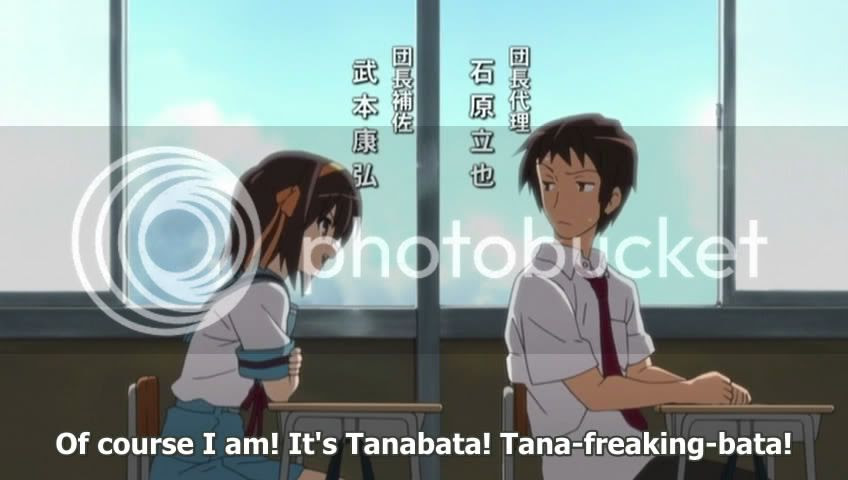 The episode started with Kyon's usual deadpan narrative. It seems that summer is upon them which is why he's fanning himself to cool down. An excited Haruhi, who is seated behind him is prodding him about the date that day -- apparently it was Tanabata that day -- and it is an important day for Haruhi. 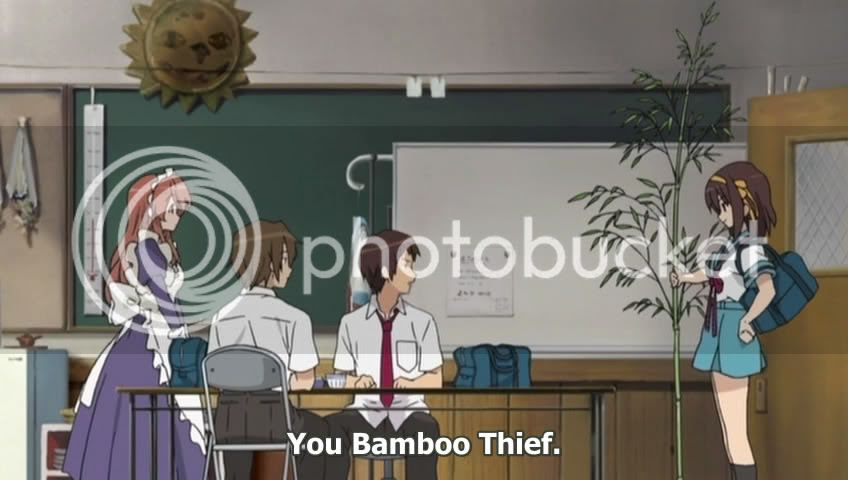 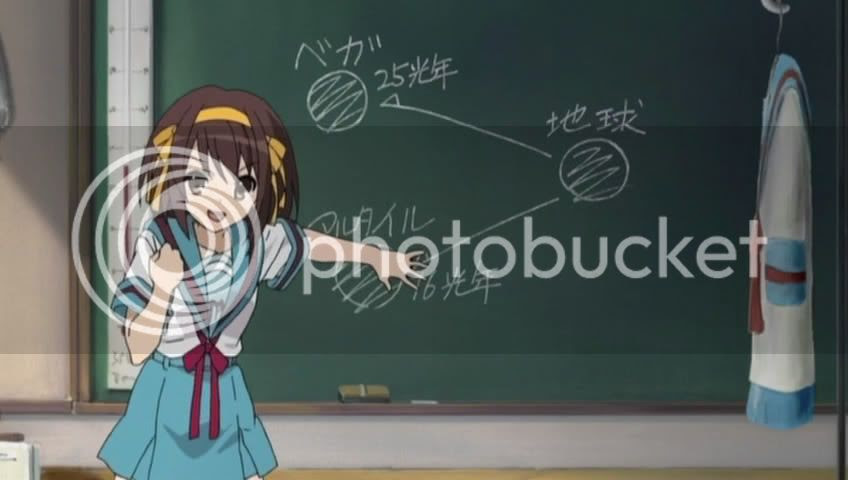 Later on at the SOS Brigade room, Haruhi barges in with a bamboo tree she took within school grounds. She states her plan of sending their wishes to Orihime and Hikoboshi (the Gods of Tanabata) faster by pointing the bamboo tree towards Vega and Altair (Stars of the two Tanabata Gods). Haruhi said that based on the special law of relativity ("No one can travel beyond the speed of light...etc. LOL) their wishes won't be granted right away, and so they have to put down wishes that will be granted in the future. Kyon points out that they'd be granted 30 and 50 years from then, but Haruhi counters that they'd probably be given a special summer discount of 50% off so it'll be down to 16 and 25 years. LOL. I luff Haruhi's insanity. Kyon complains to Itsuki that Haruhi simply has no common sense, but Itsuki disagrees and says that even if Haruhi wanted the world to be different and had the power to recreate the world from nothing -- the world is still the same. So Itsuki concludes that she still has common sense in her. 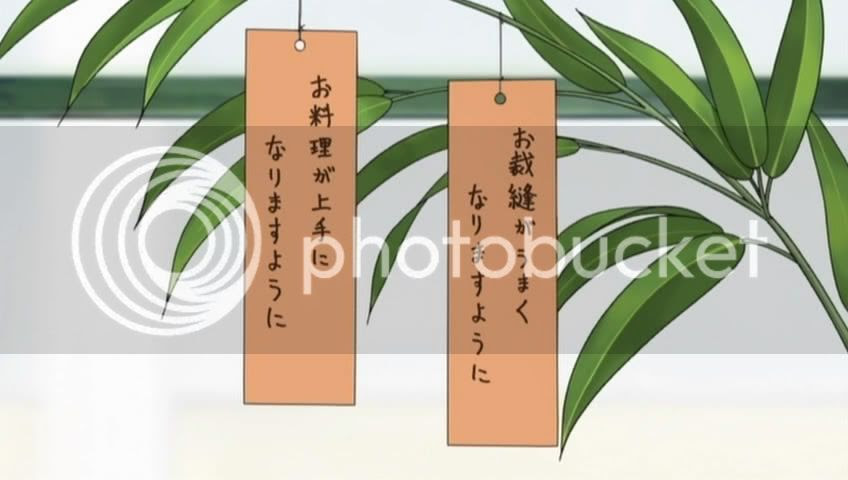 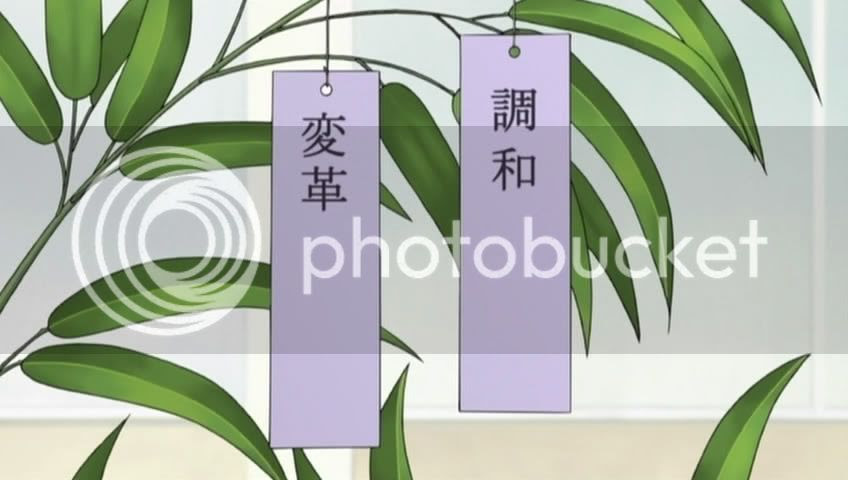 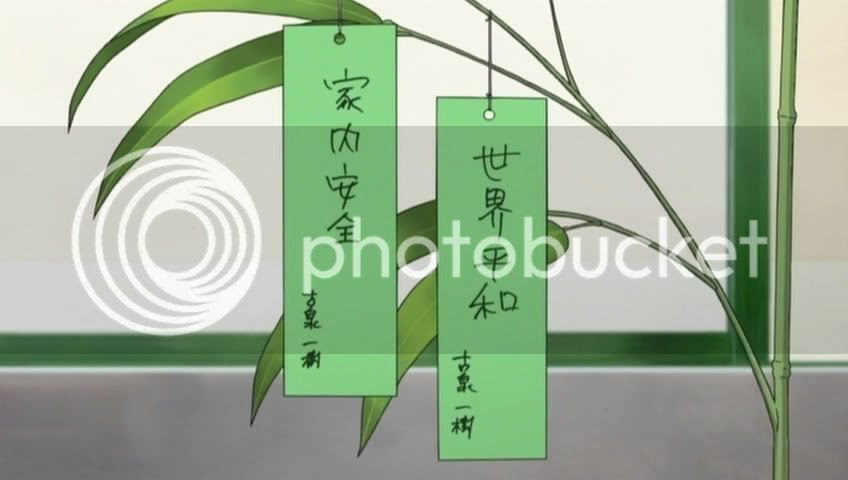 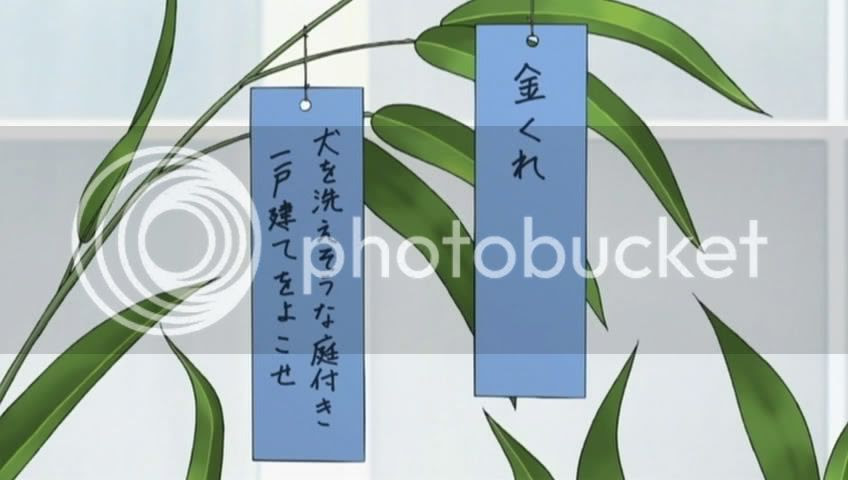 And so, the gang wrote down their wishes and hung them on the tree:
Mikuru - Get better at sewing and cooking (LOL. Poor confused Mikuru-chan)
Yuki - Reform and Harmony (XD Yukiiii *heart*)
Itsuki - World Peace and a happy family
Kyon - Money and his own house with a garden where he can wash his dog
Haruhi - Earth Rotating backwards and the world to revolve around her (LOL. Insane as always X3) 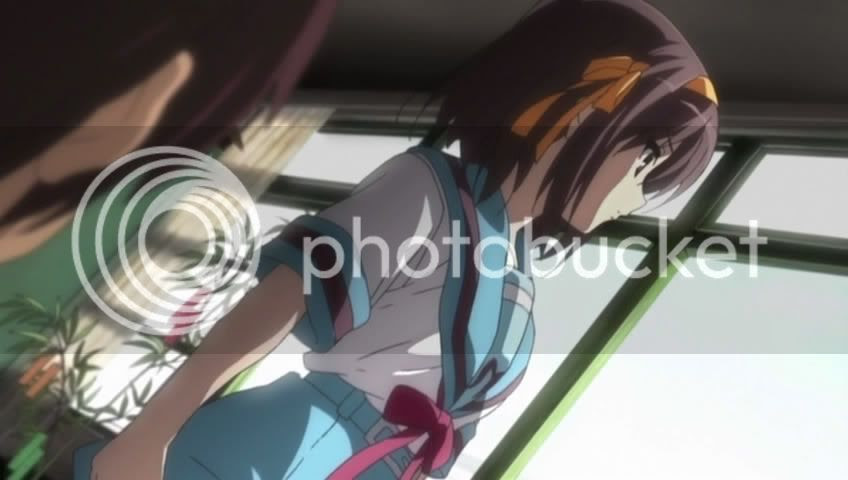 After hanging their wishes, Haruhi ponders that 16 years is pretty much a long time from then and suddenly becomes silent -- which Kyon finds weird. Then, Mikuru gives him a note to stay in the room after everyone has left. After a while, Haruhi took her leave, and Itsuki and Yuki followed -- Yuki gave a note to Kyon which he didn't read at that moment. During this part of the episode -- I couldn't help but notice Kyon keeps noticing how cute Mikuru is... ECCHI! 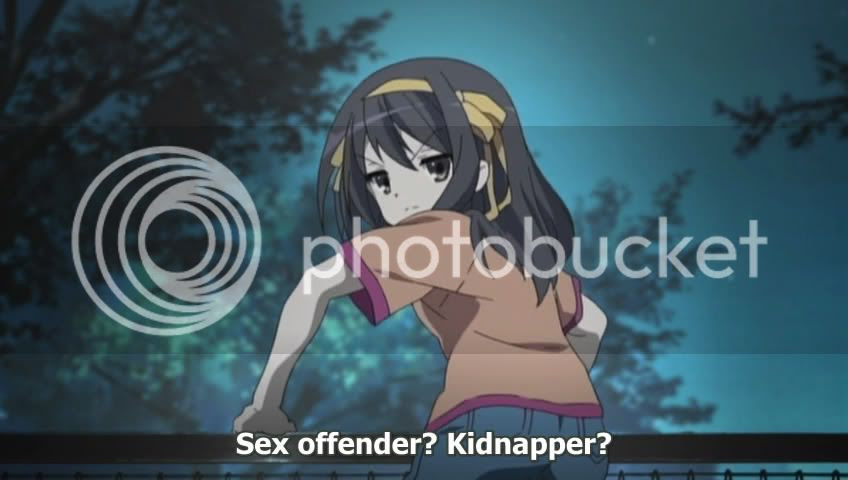 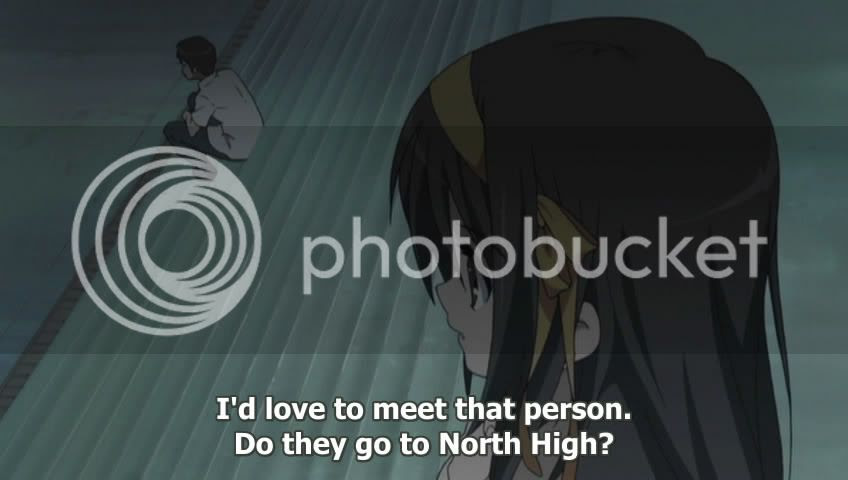 Kyon helped young Haruhi and afterwards, Haruhi asked for his name. Kyon told her he was John Smith -- this was the reason why Haruhi asked if he was John Smith early in Season 1; and if they had met before. Then she suddenly asked him if he believed in aliens, time-travelers, espers and sliders. Kyon answered her frankly and told her that he knows someone who believes in them. The young Haruhi became excited and wanted to meet this 'person' and mentions that she wants to go to North High School to meet that 'person'. After that she took her leave.
Kyon awoke the still-sleeping Mikuru -- who found out her time-traveling device is lost and told Kyon that they're stuck in that time. Kyon, however, realized that Yuki's note might've meant something, so they tried to meet the previous Yuki in her apartment.
After telling who they were and why they were present in that time, past Yuki began to 'merge' her memories with the present Yuki (which I find so awesooooome x3), and told Kyon and Mikuru to sleep in the next room. Yuki suspended time in that specific room and woke the two up 'three years' later -- which happened in a few seconds LOL. 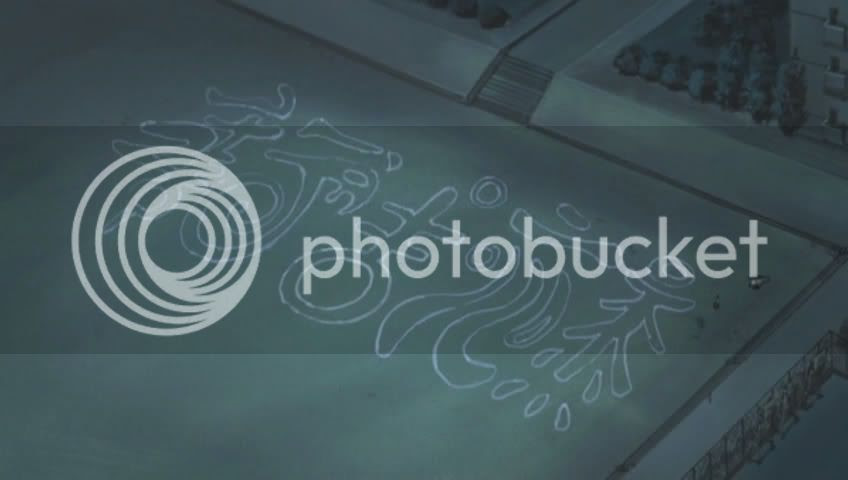 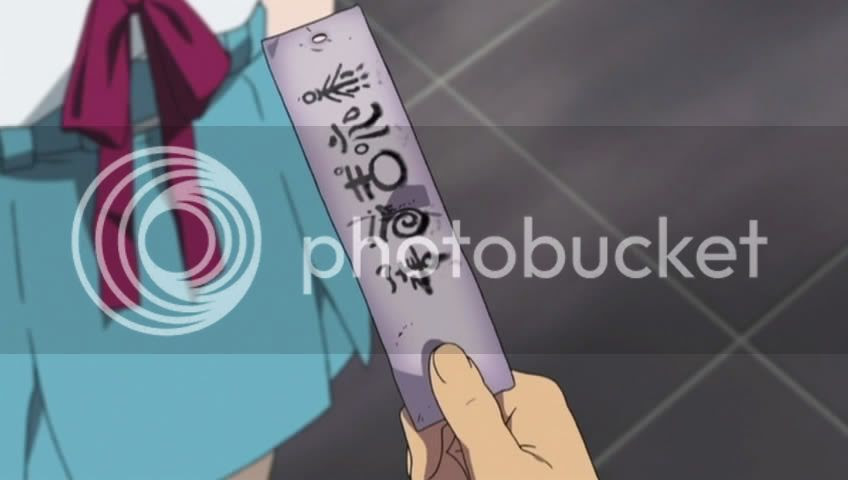 Left: Kyon's drawing in Young Haruhi's School drawn as per Haruhi's instructions
Right: Yuki's note to Kyon
Yuki again handed the note she gave Kyon earlier -- but this time, it showed evidence that some time has passed since it was written down. The symbols that were written were the exact same ones young Haruhi asked Kyon to draw, and so he asked Yuki what they meant. Yuki explained that it meant "I'm here". When Kyon asked if it was alien language, Yuki did not respond.
The next day, Kyon asks Yuki about the time-traveling, and if it was possible the time and space are continuous, since Mikuru claims that it wasn't. Yuki answers by saying that the theory has not been proven and so there is no certainty to this fact.
----
That pretty much wraps up the episode. The video I downloaded didn't have the next episode preview so I don't really know what's going to happen in the next episode (which will probably subbed by tomorrow. LOL). I do hope that the series will continue to be crack-happy. But all the time traveling issues and loop holes regarding there possibly being two or three entities of a person existing in the same time and space is just puzzling... and I wonder if there are disappearances: Example: Did Kyon and Mikuru disappear when they time-travelled to the past?
Rabbit Poets made a timeline of Kyon's supposed time travel and the events that happened during season 1, and how, after that, Kyon has both memories in his head. It also makes me wonder where 'before-time-travel' Kyon went. It is all so confusing... but then again, this series is pretty much crack, and if Code Geass can do astounding WTF-How-did-that-happen!? moments, then a series where pretty much everything is bizzare can sure get away with the plothole.
I can't wait for the next episode to air~ *flails*
Served by ninjovee Time: 11:17 PM