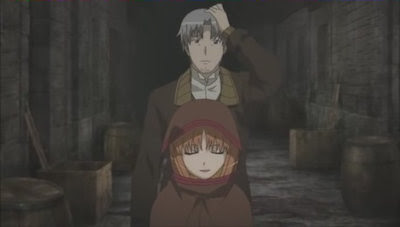 ~ I so wanna finish this right now. I just need my precious time~

Summary:
Lawrence and Horo go see Rigolo and are at first awed by his magnificent garden behind his house encased in large glass windows. Rigolo takes them downstairs where Horo picks out a few books containing old legends from the north and Lawrence ends up carrying them back after saying too much. Lawrence and Horo spend a nice night together and Horo later confesses that she is afraid of the journey ending and of being separated from Lawrence. Lawrence finds out that Abe does business in stone statues and is about to get out of the business to cut her losses. At the end of their conversation, Abe asks Lawrence if he would like to sell Horo.

General Reactions:
My favorite part in this episode was when Lawrence and Horo are spending the night together but the sweetest part was when Horo admitted that she would feel bad if their journey comes to an end. It is really is a squeeeeeeeeeee moment since this is could mean that Horo has a special place for Lawrence in her heart. And I can't imagine how hard would it be for them to be apart? For sure, they would long to be in each other's side when the time comes that they will be next to each other.

I am also surprised with what Abe asked Lawrence as the episode ended. Of course, Lawrence is shocked to hear what Abe asked from him. It's very absurb thing to ask and it happened at this time that the two are starting to recognize the lovee that they feel with each other. Such a wrong timing!!!!!!!!!!
Served by xtine06 Time: 11:36 PM