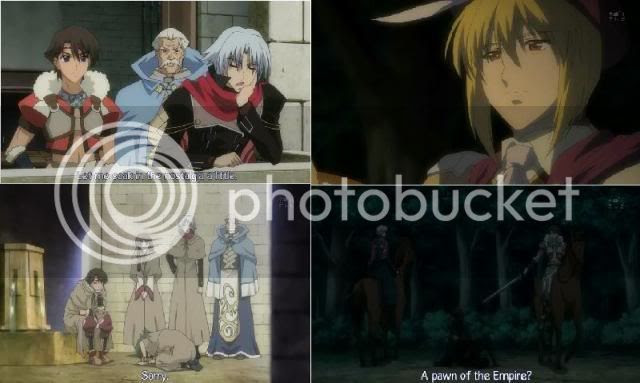 Newly discovered cuteness: Taliesin!!
As my heading above suggest, I spotted my new bishounen for the Spring season, Taliesin! He is a ministrel and plays the harp. Actually, aside from the looks, it's his harp playing that caught my attention. You see, the harp is one of the rare instruments to be featured in a series or in an anime. Most of the time, its the piano or guitar or the drums. But to use the harp? I really adore and love people who can play this beautiful and elegant instrument.
Moving on, this episode just established that the people of Gael had already settled down living in their new home but their main problem would be their food supplies. They can't survive by only just hunting and eating the same food everyday. And so this is where the plot of this episode revolved.
This episode also showed the compatibility of Arawn and Arthur. Their personalities complement each other, so they are perfect partners. Arawn helped Arthur grow maturely and Arthur has helped Arawn be more responsible as the Chieftain of the tribe and show leadership to their people.
Anyway, I thought there's going to be action this episode but to my disaappointment, there's none. Well, there's a little when Arawn and Arthur attacked the Empire's pawn following them but it all ended there. But the preview for the next episode showed some action scenes so, I hope that this time, there's got to be some action and excitement involved.
Served by xtine06 Time: 9:52 PM