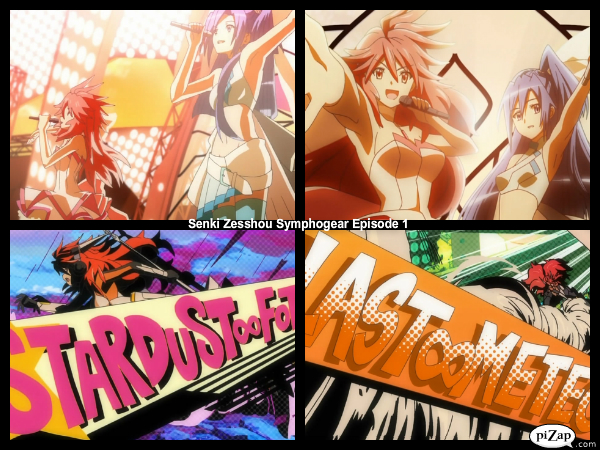 Plot Summary:
Two years ago, a pair of idols, Tsubasa Kazanari and Kanade Amō, collectively known as ZweiWing, fought against an alien race known as Noise using armor known as Symphogear. To protect a girl named Hibiki Tachibana, who got severely wounded by the Noise, Kanade sacrificed herself. Two years later, as Tsubasa has fought the Noise alone, Hibiki ends up gaining the same power as Kanade.
Source: http://www.animenewsnetwork.com/encyclopedia/anime.php?id=13659

I am still totally undecided if I will be watching this regularly. I guess it's on "Under Observation" status, but I get the feeling that I shall be watching this every week because of my preference for any anime that is with or about music. I haven't watched Episode 2, though I am already done with the download as I caught up with some of the main stream anime like Detective Conan, Naruto and Gundam Age.

As I said, what interested me the most are the songs and the fact that our heroes are a idols who need to sing while fighting. It's a fairly fresh idea and I do hope that this would turn out to be a good watch in the long run. And since the plot is somewhat related to sounds and to music, it would be fitting to have the enemies to be called "Noise", which has a definition of unwanted sound. Fitting right?

Another thing that makes this interesting for me is that I get to see a lot German in this anime. Its pretty obvious since the duo of Kanade and Tsubasa are called ZweiWing. Plus, towards to ending sequence German words keeps popping out, especially when Hibiki went beserk with her newly found/awakened power. I guess she was suddenly called the Aufwachenschlagen?

I do have high hopes for this one, and I hope that this will not disappoint me. I am only watching a few anime from this season (which is normal for me at this time of the year, by the way) and I don't want to drop whatever few I have.
Served by xtine06 Time: 10:11 AM